View cart “Manipulation” has been added to your cart.

This painting is a scene of ongoing manipulation. The male character spotted behind a female is taking over her main character role. Although a female character thinks she is in the main spotlight. He is whispering to her ears and as he places his hands around the woman’s head. He is really eager to make his own vision towards the woman’s view. Her eyes are wide open, but she cannot see the future as it is not hers.

There are wolves’ heads staring from the dark. The woods are shaped like a woman’s body and the flowers are crawling, these objects symbolize the signal and impulses from nature. It disturbs the attention and intuition from the female character. Her naivety makes her ignore all the signs the surrounding is giving her. She enjoys this moment, where she is not in control. Gender in this painting represent dominant and submissive character and doesn’t mean as a gender itself. 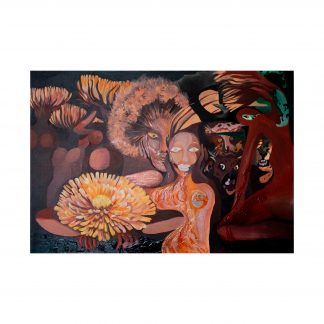